Accept
We are committed to your safety. Please keep in mind that due to the coronavirus pandemic, many businesses and attractions are slowly reopening and getting used to the new guidelines and regulations. Please be kind to those working and serving you by respecting social distancing measures and wearing a mask when appropriate. We recommend you visit a location’s website for the latest information. 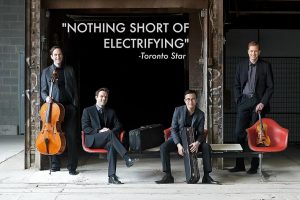 The Phelps Mansion is pleased to welcome the New Orford String Quartet:

Four musicians with equally stellar pedigrees formed the New Orford String Quartet with the goal of developing a new model for a touring string quartet.  Their concept – to bring four elite orchestral leaders together on a regular basis over many years to perform chamber music at the highest level – has resulted in a quartet that maintains a remarkably fresh perspective while bringing a palpable sense of joy to each performance. The Toronto Star has described this outcome as “nothing short of electrifying.”

Consisting of the concertmasters and principal cellist and violist of the Montreal, Detroit, and Toronto Symphonies, the New Orford String Quartet has seen astonishing success, giving annual concerts for national CBC broadcast and receiving unanimous critical acclaim, including two Opus Awards for Concert of the Year, and a 2017 JUNO Award for Canada’s top Chamber Music Recording. Recent seasons have featured return engagements in Chicago, Montreal and Toronto, as well as their New York City debut on Lincoln Center’s Great Performers series.

For more information on the New Orford String Quartet visit their website www.neworford.com

The Phelps Mansion is a Proud Partner of the Binghamton Philharmonic’s Beethoven Project.

This program is made possible in part by a grant from the United Cultural Fund, a program of the Broome County Arts Council.  Additional support for Broome County provided by the Stewart W. & Willma C. Hoyt Foundation.