Accept
We are committed to your safety. Please keep in mind that due to the coronavirus pandemic, many businesses and attractions are slowly reopening and getting used to the new guidelines and regulations. Please be kind to those working and serving you by respecting social distancing measures and wearing a mask when appropriate. We recommend you visit a location’s website for the latest information.

The acclaimed world music ensemble UnityGroup will present One World,  a musical performance that celebrates our own diversity and world community, at Sarah Jane Johnson Church, 308 Main Street, Johnson City, on Saturday December 11th at 7 pm.  The band will highlight music of spirit and celebration from its extensive repertoire of original compositions. Families are invited to attend this free holiday season event. Masking will be requested, and the church will be limited to half capacity. Free-will donations will be accepted to benefit CHOW.

Free tickets on site at Sarah Jane Johnson Church, 797-3938 or online at https://unitygroup.eventbrite.com

UnityGroup was formed by Rob Weinberger in 1997 based on  world and african music he performed in NYC some years earlier. Currently featuring Harris Thor, Rob Lipari, and Chris Carlsen,  accomplished  creative players in the region, UnityGroup’s  performances have been celebrated for dynamism and creativity. Rob and Harris incorporate exotic instruments such as African drums, steel pan, and didgeridoo into their compositions, together with sounds and styles suggestive of West Africa, the Middle East, the Caribbean, Europe, and Asia.  The band has performed on television, radio, at countless school concerts,  regional festivals, and jazz vespers based events, and has released several notable CDs.

This event is made possible with public funds from the Statewide Community Regrants Program, a regrant program of the New York State Council on the Arts with the support of the Office of the Governor and the New York State Legislature, and administered by The Earlville Opera House. 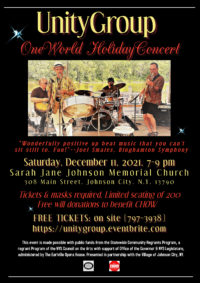